The financial success of the 2nd ESN meeting in Göttingen in 1978 allowed the endowment of funds to support the ESN Young Investigator Lectureship Awards (now named “Young Scientist Lectureship Awards”) which recognize the research achievements of up to three promising young scientists in neurochemistry research. Candidates of 38 years of age or younger at the submission deadline should be based in a European country and/or should have achieved most of their outstanding achievements in European research groups. The ESN awards currently consist of an award medal (see picture below) and a paid trip to the ESN meeting, where the awardee(s) present a 30 minute lecture. 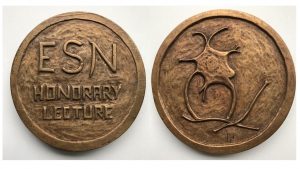 Javier Caso (Stanford, USA): Effects of prior stress in the severity and outcome of experimental cerebral ischemia: mechanisms involved.

Alain Chédotal (Paris, France): Role of semaphorins and slit proteins in axonal guidance in the telencephalon;

Ralf Dringen (Tübingen, Germany): Metabolic interactions between neurons and astrocytes in the defence against oxidative stress;

Else Marie Fykse (Kjeller, Norway): “The role of phosphoproteins in synaptic vesicle neurotransmission”

Harvey McMahon (Dundee, UK): Barium-evoked glutamate and met-enkephalin release from synaptosomes: Insights into the locus of action of tetanus toxin.