A Brief History of the ESN

The European Society for Neurochemistry (ESN), which provides for “the advancement of the science of neurochemistry for the public benefit”, was founded on two fundamental principles in the mid-1970s at a time when Europe was a divided continent. These were that it should be open to members from all European countries, East and West, and that it should aim to bridge basic and clinical neurochemistry. Following informal discussions among a group of European neurochemists at meetings in Brussels (1974) and Sweden (1975) co-ordinated by Armand Lowenthal and Lars Svennerholm respectively, a working group was established to organise the structure of a new scientific society. This group consisted of D. Biesold (Leipzig), A.N. Davison (London), Z. Lodin (Prague), A Lowenthal (Brussels), P. Mandel (Strasbourg), G. Porcellati (Perugia), L. Svennerholm (Goteborg), H.J. van der Helm (Amsterdam) and H. Woelk (Erlangen). Alan Davison, on behalf of the Neurochemical Group of the British Biochemical Society, proposed that the newly established Society should meet at the University of Bath, U.K. and the inaugural meeting was duly held from 19-23 September 1976 with around 350 registered participants. To ensure a clinical flavour to the meeting, the theme of “Basic Aspects of Neurochemistry Related to the Epilepsies” was chosen. The local organising committee consisted of four leading British neurochemists of the time (Brian Ansell, Tim Hawthorne, George Lunt, Herman Bachelard). 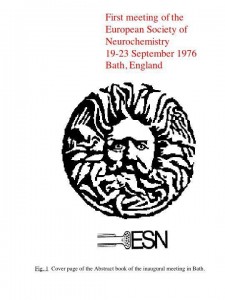 The ESN logo for the meeting depicting a nerve terminal, which survives to this day (see below), was designed by Lunt and Bachelard. Apart from the science discussed at the meeting, the Society agreed that future meetings should be held every two years, moving between European countries, both East and West, and in alternate years to meetings of the international society (ISN). Another key provision, given strict currency restrictions in place at the time, was to operate without any membership subscription and, even to this day, the subscription has been kept at a minimum (€25 in 2017). The first elected officers of the Society were Dietmar Biesold (President), Herman Bachelard (Secretary) and Volker Neuhoff (Treasurer). The officers are ably supported by the ESN Council of (currently) seven elected members, as well as ex-officio positions of Company Secretary and Society Historian.

The second meeting of the Society was held in Göttingen in 1978 organised by Volker Neuhoff, which was both a scientific and a financial success providing a very significant surplus to support promising young scientists to attend future meetings and for the presentation of ESN honorary lectures. The ESN young lectureship awards recognise up to 2 or 3 promising young neurochemists and the awardees are documented {see a dedicated file on the website}.

The 8th meeting of the Society (organised by Dietmar Biesold and Volker Bigl) was held in Leipzig in 1990 at a historic time with European frontiers being opened up between East and West and the imminent re-unification of Germany. The Society returned to Leipzig for its 18th meeting in 2009, organised by Thomas Arendt, and subsequently re-visited the site of the inaugural meeting in Bath in 2013, at the 20th ESN meeting, which was organised by Robert Williams and Marcus Rattray and this time welcomed 260 participants including several who had attended in 1976 (this author included). The next meeting brought 150 delegates to Estonia to the historic University city of Tartu in June 2015 for a 4-day conference focused on molecular mechanisms of regulation in the nervous system, the local organising committee being chaired by the ESN Treasurer, Ago Rinken, with Council member, Illana Gozes, providing a highly topical and stimulating scientific programme as chair of the international programme committee. The meeting was also characterized by enjoyable social events ranging from a spectacular opening reception in the Science Center to the conference dinner at the University museum. The meeting abstracts are freely available on open access at: https://springerplus.springeropen.com/articles/supplements/volume-4-supplement-1

The 2017 ESN meeting has been organized jointly with ISN and took place in Paris (France) with the Organizing Committee being chaired by Boris Zalc.  This meeting celebrated multiple anniversaries:  the 40th of ESN, 50th of ISN and 60th of Journal of Neurochemistry.  At this meeting a new award in memory of Herman Bachelard has been introduced with the awardee being Ferdinand Hucho. The award is given to an ESN member who  has contributed significantly to development of neurochemistry and the Society. The 2019 Biennial ESN meeting was held in Milan (Italy) chaired by Nico Mitro, Angelo Poletti and Massimo Aureli. The Programme Committee has been chaired by Tony Turner. The second Bachelard award was presented at this meeting to Pam Fredman.

The list of meetings (1974-2019) can be found  here and at a dedicated webpage in the History section.

For some of the earlier meetings, the Proceedings have been published, usually by local publishers, and the abstracts have been made available either in Neurochemistry International or more frequently in Journal of Neurochemistry. Since the Berlin meeting in 1999 the ESN meetings have been held jointly with ISN when ISN met in Europe (every 6 years). From the 2001 meeting in Perugia, the theme of ESN meetings has been “Advances in Molecular Mechanisms of Neurological Disorders” maintaining the original key aim of linking basic and clinical neurochemistry. For a complete list of ESN meetings and publications associated with the meetings, {see a dedicated file on the website}. The Society has also long had a policy of organising smaller workshops and more focused meetings often in association with other related societies. For example in 1995, the recently established Russian Society for Neurochemistry actively supported a highly successful School for Young Russian Neurochemists under the auspices of ESN. This initiative led to the 12th ESN meeting being held in St Petersburg in 1998, and organised by Svetlana Dambinova and Pam Fredman, who was ESN President at the time.

A recurring debate within the Society has been whether to operate a Society-linked journal of its own although it has resisted the temptation to date and the financial benefits that might bring. Nevertheless, the Society is able to provide some funding to support a variety of European neurochemistry initiatives:

An annual newsletter compiled by the Secretary updates members on Society activities. For almost 40 years, at the time of writing, ESN has been a forum for effective communication of neurochemistry among European scientists, for stimulating collaborations within Europe and beyond, for the support of young neuroscientists, and for close interactions with related scientific societies. A more extended account of the first 20 years of ESN was provided by Herman Bachelard as an introduction to the 11th ESN meeting in Groningen in 19961.

A more detailed history of ESN and its sister societies (ISN, ASN, APSN) has been published in Journal of Neurochemistry in 20202.